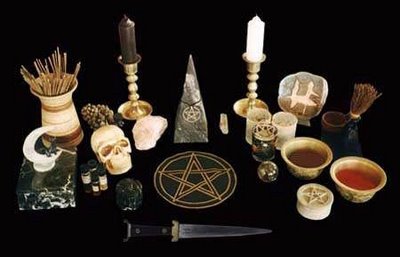 With my first novel completed, though I am still actively writing the second in the series, I am also back at work on my book on magick, "The Eight Paths of Power," with a goal of finishing it by the end of the year.  Over the course of the year I hope to get that online course going that I promised regarding this work.  This is an excerpt from the manuscript in progress, one which I wrote this morning (as yet unedited, etc.)  I put it out there to spark thought.  Since it speaks of magickal ethics, I expect that people may froth at the mouth about it.  I ask you to re-read it and consider whether or not I actually meant what you *think* I meant before you go off at me on Facebook or on my blog, however.  And I hope you enjoy it, whether you agree with me or not!

I assume most, but not all, of my readers are Witches and Pagans, so many of you have likely heard by now of something called “The Witches’ Rede” or “The Wiccan Rede.” For those who haven’t, there is a longer poem (we’ll be examining it in Part Three) and a shorter version. The short version is an ethical statement, “An it harm none, do what thou wilt.”

Now, what does that mean in modern English? Loosely translated, it means “as long as you are not hurting anyone, do whatever you want.” And it implies that there are consequences for doing things that do hurt people. Witches call it the “Threefold Law,” and it states “that which you do shall be returned to you threefold.”

This concept is both limiting and liberating. It liberates us from unnecessary guilt. Is our behaviour actually harming anyone? If not, what does it matter if someone else does not approve?

There are other codes, or guidelines, of magickal ethics as well. The Thelemites and Ritual Magicians speak of something called one’s “True Will.” The Norse folk traditions speak of the “Nine Noble Virtues.” The Druids seek to do everything in the light of “truth.” Consider your perspective, if you have chosen these paths over Wicca or Wicca-influenced Paganism, as a guideline as you approach the next exercise, which I always put to my students and coveners.

In this scenario, visualize yourself going home from a late night movie. You happen to turn around a corner and in an alley, you see a man attacking a woman. She is pinned against the wall and crying. What do you do?

It’s an interesting dilemma because I don’t really believe there is any way to actually “harm none.”

If you walk away, the woman will be harmed.

If you yell something at the man, you might be harmed. (And make no mistake; you are one of the people that the gods do not wish you to harm!)

If you yell for the police, they may or may not come. If they don’t, the woman will likely still be harmed and you might be as well for yelling out!

If you follow the advice of self-defence courses and yell “Fire!” one or more good Samaritans may appear to put it out. There will likely be a physical conflict with the man and he or they may be harmed.

If you walk away to phone the police, it will definitely be several minutes before they arrive. In that time, the odds are good that whatever is happening to the woman will continue to happen, so she will be harmed. The man might get away and then he may harm others. If you involve the police and the woman does not know her attacker, the likelihood is that he will never be caught because there will be no way to find someone against whom to check the evidence.

If you attack the man physically, you might be harmed and you are hoping that he will be! If you attack with friends, it is likely that he will be harmed more than you. Then what do you do afterwards? Do you turn him into the police, knowing that you might also be charged with assault for beating him up? But if you don’t, what is to stop him from attacking someone else? Or getting his buddies and coming after you?

If you walk away and do a hex or binding spell later on, you can guarantee that he will be harmed (even if all that happens is that the police pick him up; then he’ll go to jail and his life will be ruined, not to mention that harm often comes to people in jail.) The woman will still be harmed and you will have permitted that. The advantage of this one is that he is not likely to harm anyone else in the future.

Maybe you would stop him physically and then bind him, hoping to cover both short and long term harm. But the risks and moral dilemmas remain for both possibilities.

Consider your actions. Why do you think you made that decision? Consider whether you might have reacted differently if the roles were reversed, or if it were two men or two women involved in the same conflict? (You might; statistically, a large number of abusive situations between gay or lesbian couples do not get reported because of prejudices or fear of not getting proper justice because of said prejudices. Or perhaps you would just make different assumptions about what was actually going on.)

There is no wrong answer; or maybe it is more accurate to say that there is no “right” one. So what would you do when you can’t “harm none?”

I believe that the Rede admonishes us to think about it. When you would “harm none” by your actions, that gives you permission to do it freely and enjoy it without unnecessary guilt and baggage (sex can be a lot more fun under the Rede, for example!) But when you can’t avoid harm, then you have to think about it. What is the best course of action for you? Then a true Witch acts according to her own moral beliefs and accepts the consequences of that decision. She takes personal responsibility for her actions.

Let me put this in a different way according to the magickal ethics that I am familiar with, because while I am a Witch and much of this, therefore, comes from a Wiccan perspective, I mean to make it available to all.

For those who practice folk magick and believe in hexing as well as healing, all the same possibilities remain, and courage is demanded.

According to legend, St Patrick asked Oisin, the son of Fionn MacCumhall, what sustained his people before the advent of Christianity. He said, “The truth that was in our hearts, and strength in our arms, and fulfilment in our tongues.” My friend Brendan Myers, a respected Druid philosopher, points out: "It is interesting that he should cite truth first, as though truth had an overriding place in the culture. This evidence leads me to believe that the first moral principle of Druidism is this: in a situation where a moral decision must be made, we should always choose truth, in the expansion and enrichment of human knowledge, in ourselves and others, and at all levels of our being." (2) Brendan sees the Druid as being similar to my view of Witches. He believes that the Druids may not have adhered to specific rules and authorities to determine proper ethical conduct. Instead he sees them striving to become a certain kind of person, out of whom ethical behaviour naturally arises.

A Thelemite or Ritual Magician will act according to his best belief regarding his True Will, which is both a conception of one’s destiny and true path in life purpose, but also a moment to moment guide to actions that are in harmony with one’s nature and place in the universe; and much of this is intuitive and more concerned with being in harmony than in “lust for result,” similar in a way to the Buddhist belief of “non-attachment.” This might or might not adhere with traditional morality and ethics as we understand them. But he will live with the consequences of that decision, and accept that this is necessary. He will not later moan about his fate if he is arrested for assault, if he chose to attack the attacker, for example.

The key here is that no matter what it is that you do, you must make a decision that you can personally live with, and then live with the consequences of that decision. If you make a mistake, you need to find a way to live with that mistake and learn from the experience. This part of magick is as necessary as the skills to practice it.

Oops, you forgot something.

The words you entered did not match the given text. Please try again.